Finding what you want to do as a career, is pretty much the same as finding your soul mate. Both are an emotional journey, full of ups, downs, swings and roundabouts. But I think thats enough of the lame cliches, especially for a Friday evening.

Anyway, truly knowing exactly what you want to do as your job for the rest of your life is pretty daunting and very overwhelming. I think unless you grow up with an idea that is completely drilled into your head, by parents, other loved ones or even just yourself, we all experience this unsettling feeling of not knowing what we want as a career. And that is perfectly OK.

Most of us follow the same path that seems like the ‘right’ way to get a good career. This normally goes as follows: nursery, primary school, secondary school, sixth form, university and ending with a job. But others choose an apprenticeship and head straight into work. Or other people drop out of school with no qualifications, learn a trade and build multi-million pound businesses. There really isn’t a right or wrong way to go about achieving what you want from life. But I think this ‘right’ idea, that we all have to follow a set routine is undeniably wrong.

I always dreamed I’d be an air-hostess. From the ripe age of 8 I had perfected, and I mean to a T, the Virgin Atlantic air-hostess walk. I’d seen it countless times on the adverts between each X-factor contestant and looking back I’m almost 95% sure I actually just wanted to be the model from the advert and not an actual air-hostess. But for a while I wasn’t convinced.

So to achieve my ‘dream’ I decided at sixth form I’d study Travel and Tourism and also complete an air-hostess NVQ. I was so ready, I was going to apply for British Airways and Virgin as soon as I finished my A-levels, I was just so excited that this was going to be my career. And then boom.

Half way through my A-levels, I was diagnosed with Bilateral Uveitis, which is a rare inflammatory disease that effects both my eyes, and of course my vision. Though at the time my doctor didn’t have much idea what caused my vision to deteriorate so quickly, after 3 years they decided to put it down to anxiety.

I was experiencing a lot of stress, trying to pass my driving test (worryingly, providing I couldn’t see), trying to smash my A-levels, dealing with typical 17 year old girl problems (BOYS.) On-top of that I was watching my grandma deteriorate and then putting pressure on myself to get a good career. I kept a lot of my emotions bottled up, I lost a lot of weight and almost lost my eyesight. All because I didn’t want to talk about what was going on, because I didn’t think anyone would care.

After finding out I was ‘clinically blind’ I was immediately put on immune system suppression tablets and steroids, which quickly reversed the problem, but subsequently I’ve had 12 eye operations in the past 3 years. (Don’t worry I can see just fine now, I mean wouldn’t go as far as 20/20 vision, and I wear glasses for driving. But incase anyone thought I was a hazard, I no longer am.)

Because of my medication and the uncertainty of my vision at the time, my consultant advised I opt for a different career path, which for a 17 year old who had her heart set on becoming an air-hostess for almost 10 years, was DEVASTATING. But thankfully I had begun my UCAS application as a back up.

After speaking to my tutors I decided I’d apply for a joint honours in English Lit and History, at Northumbria Uni. Bearing in mind I had no clue what I was going to do once I actually had my degree.

My consultant advised I live at home to avoid contracting any illness’, which kinda put a little bit of a dampener on my first year uni experience. But then I met my really lush boyfriend so I’m really not going to complain about missing out on the typical uni experience because we got to make some really amazing memories.

This was when I really discovered my love for writing and actually wanting to make a career out of it.

It was actually Jason that pointed me in the direction of copywriting. I didn’t even know it was a job until he’d read one of my essays and thought I’d be good at it. But it was writing that really helped me de-stress.

I began just by really enjoying researching my topics for both my literature and history degree. Without sounding like the biggest nerd…I love learning. Yep, I said it and I’m not even bothered. Being able to go to a library and pick out a book with all this new information I don’t know about, excites me. Even more than a Victoria’s Secret sale. Incase you don’t know, thats a lot.

Or even being able to Google anything you want to know, and just have all this new information at your finger tips, is just fascinating to my little brain. And don’t even get me started on writing about it. But yeah, it basically all started with writing essays and letting my brain escape into my keyboard and just write.

So this quickly lead to me being here, on my blog!

Blogging was such a good way to relieve any anxiety I experienced, which has diminished so much since 2016. It actually helped me organise myself a hell of a lot more too. I was able to write about what I wanted to write about, as plain, little me.

Thats the amazing thing about writing, you can be a voice. No one is judging you by how you look or how many followers you have. They are just interested in what you have to say, and if they aren’t, well, they probably won’t read it. Simple.

Its this, combined with my love for research, that made me really love and want a career as a copywriter. Being able to provide a voice for a client or for an inanimate object, or for a place or for someones company is amazing. Being able to educate people on topics that actually matter or topics that people really care about, and being that voice behind all these different things is probably up there with one of the coolest jobs I personally have ever heard.

Because I’m not just plain, little Emily who has a blog and has an extremely rare eye problem. I’m a voice behind new content, there to educate others and to me, thats pretty cool.

I learnt a lot over the past 3 years and even though I’m not religious, the saying ‘make a plan and God laughs’ couldn’t be any more true.

If I never experienced having to quickly change my career path, I wouldn’t have met some of the most amazing people I have ever come across, that have changed my life in so many ways, for the better. I probably wouldn’t have had the same appreciation as I do for finding what it is that I want to do as a career, because I really appreciate how much writing has helped me grow as a person. And I probably wouldn’t have had the same sense of confidence as what I currently have, because I was made so vulnerable and had to learn how to build myself back up. Finally, if I never went to university I would never have graduated in July with a 2:1, which btw I am MEGA proud of.

My advice would be, don’t ever become too disheartened on not knowing who, what or where you want to be in life. Situations can change, quite literally overnight, doors shut so others can open. Yes, I know I said I’d be done with the cliches earlier but I promise I am now.

But seriously, I hope this post helps just one person realise that you don’t need to put so much pressure on following what is deemed the ‘right’ path. Because we all end up where we are supposed to be. 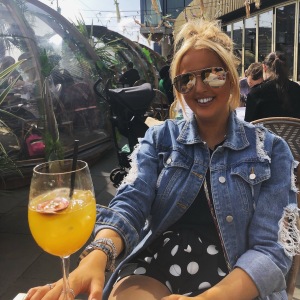 Hey everyone, welcome to my brand-new site, crafted solely to give you the run down you need on everything from my favourite foundation to my go-to restaurant on the other side of Europe.

Are you a newbie? Well the more the merrier. If you love all things skincare or shopping, sparkly or shiny, sandy or sun kissed, or even success stories or something that`s soothing for your soul…then you’re in the right place. 🖤 Em xo

Click here to find out even more about me